If Cricketers Were Cartoon Characters

Thank you IPL, for grinding cricket down to a screeching halt.

This is the time of year where instead of the *real* game we have an exhibition of cricket ball abuse featuring teams tweedle-dee and tweedle-dum while us poor fans and purists have been forced to revisit our old highlights collections, banish cricinfo.com to the wilderness, and suffer severe writers block.

Devoid of inspiration, what must the dear old blogger resort to?

Some months ago there was an internet obsession with dopplegangers, or lookalikes. Unfortunately most of the time it was clutching on straws, heck people tell me I look like Jehan Mubarak, big deal. And truth be told human to human lookalikes are a tad boring, so we see the same person twice... we've seen twins before and not the Schwarzenegger-deVito kind either.

So instead I present to you, animated and cartoon contemporaries of famous (and not so famous) cricketers of recent times. 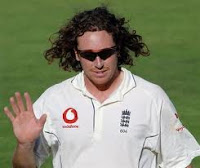 Darren Lehmann is Shrek
The team even nick-named him Shrek, so everyone is in on this one. Ross Taylor is Diddy Kong
Aw how cute (not you Ross). Darren Sammy is Evil Majin Buu
Armed with the goal of world domination, though with slightly different methods. Scott Styris is Beaker
Its the upside-down mouth that does it? And my personal favourite.

Shoaib Akthar is Gollum
The freaky eyes, the whispy hair... stumps or hobbit alike nobody can deny what is preciousss to them.

Care to add, agree or disagree?

Posted by The Cricket Musings at 12:08 PM