International T20 is the only good T20

Regular readers of this blog will know by now some of my pet peeves:

However the recently concluded International T20 World Cup changed my mind about one thing. There is such thing as quality, watchable Twenty20 cricket and this quality only comes from one stage, the international stage.

Therefore my hate has been redirected now purely to domestic Twenty20 cricket, which really is nothing more than the much described batting circus. The recent World Cup had one key ingredient that the IPL and its various simpleton cousins do not have, top class players participating in actual teams.

Finally we get to see batsmen playing proper strokes built on technique and skill instead of swinging madly like a wood cutter on steroids. Finally we saw bowlers being able to contain them instead of serving up a volley of garbage. And most importantly, finally we saw teams playing for national pride rather than a meaningless mishmash team of licorice all-sorts.

This wasn't the IPL, this was real cricket.


I say "World Cup" loosely though, as it is still a level below the true 50-over format equivalent. Other than the memorable inaugural tournament, the other installments came and went too quickly with administrators unable to rein themselves, looking to quickly mass produce the newly discovered candy. It is difficult to remember much of those later tournaments bar one or two matches (Chris Gayle vs Brett Lee anyone?).

This tournament on the other hand was different. Bar a certain Mr. Pietersen, every team turned up full strength and lined up on a largely even keel. And the results were fantastic.

We need to see more of this, and much less of the domestic nonsense. We have the IPL, the BPL, SLPL, KFC Big Bash, HRV Cup... heck even Canada and Kenya have their own little backyard T20 romp. 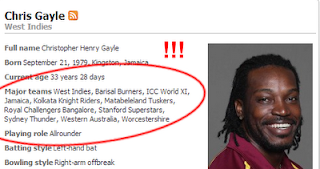 That's not even mentioning the pretentiously named Champions League T20, a sorry attempt to ape the football equivalent. The drop in quality between last month's tournament and this silly one is quite remarkable.

In a Nutshell Then...

Posted by The Cricket Musings at 4:58 PM 0 comments