And so while India are being thumped by Australia (4-0 coming your way folks), they also announced their 30 man squad of World Cup 'probables'.

Hang on a minute, thirty probables!? There are eleven members in a cricket team plus a water carrier, add four or five reserves and we have a touring party. What is the point in naming a probables list double the size of the group that will actually show up?

Here's why, it's confirmation of who will not show up.

India's list of omissions is a strange one.  Sure I can understand the concept of 'out with the old and in with the new', but in Indian cricket? Not exactly spoiled with young riches are they?

Zaheer Khan - Is very unlucky. This is the best fast bowler India has had since Kapil Dev, with the exception of maybe Srinath. He was a huge reason as to why they won the last world cup (more than Dhoni) and the other options are average other than maybe Bhuvaneshwar Kumar.  What was Zaheer's mistake? Not playing for the Chennai Super Kings?
Selection Credibility - 9/10

Yuvraj Singh - Another unlucky original from the famous 2003 campaign (and the famous 2003 world cup final flop). He is still a class batsman and experience counts especially in alien conditions. They could have easily brought him back for one last hurrah a la Craig McMillan (who at one point had given up cricket to become a salesman), but alas this is probably the end.
Selection Credibility - 8/10

Gautam Gambhir - Lets recount an actual water cooler conversation where someone remarked "Oh my god.... Dhoni's innings in that world cup was amazing, nobody in the world could have played like that".

While the crickets chirped, I dared not to say a word (already am infamous for Dhoni bashing), but sanity prevailed with a wiser one nearby "..... actually Gambhir's innings is what really turned the match, it was him in fact that won it for India".  Bang on! Although a pathetic Sri Lankan fielding effort helped too (did someone say match fixing?).

Gambhir is interesting, he was very good for a while and had a real future, but instead became pretty much worthless especially outside of India.  A 50/50 selection at the moment, not much to gain, not much to lose.
Selection Credibility - 5/10

Dinesh Karthik - Possibly the most underrated keeper-batsman in the game. He's good enough to bust into the Indian team in any format, but Wriddhiman Saha has obviously been chosen as the next in line after Dhoni. Nothing against Saha, but DK deserves a better career than this.
Selection Credibility - 6/10

Virender Sehwag - Once one of the truly great players of the game.  Despite his reputation of being a stand and slog merchant, his strength was his simplicity and his no-footwork style knew how to get runs regardless of conditions. But time and pies took their toll in the 2010s, and unlike Tendulkar there was no plan B.  A great career, but let him go in peace.
Selection Credibility - 2/10

Harbhajan Singh - Conversely Bhajji was lucky he even had a career that long. A pity because his presence meant someone like Murali Karthik had none. Riding on the wild success of 2001, he shouldn't have even been in the 2011 world cup team let alone this one.
Selection Credibility - 1/10

Sreesanth - Buried underneath this cricketing oddity crying in public, the lifetime ban, out-dancing Shah Rukh Khan in a Shah Rukh Khan show, and bowling like a garden sprinkler gone nuts... there was in fact a high class pace bowler. We're never going to see that again.
Selection Credibility - 0 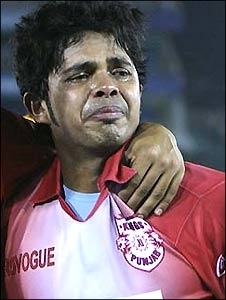 I'm calling it early, India will not win the world cup or even make the final. Would the likes of Zaheer and Yuvraj pushed them there? Their bag of tricks would have come in mighty handy in a team not built to play out of India.

Farewell to an older generation, and thanks for the memories of better days in Indian cricket.
Posted by The Cricket Musings at 7:14 PM