What kind of a world do we live in when a batsman can score 264 runs in an ODI innings, to break his own record of 209 no less?  A world where 264 surpasses the entire second innings score. A mismatch of such epic proportions should only be experienced if India played Fiji.

There is a difference between Jayasuriya sticking it to opposition 1996 world cup in an audacious counter attack, and this snooze-fest of boundaries against club level bowling.

And we aren't talking Tendulkar, Gilchrist or Gayle type pyrotechnics,  Rohit Sharma is a pretty average player.  To regard him has potentially one of the all time greats based on a silly innings like this is nonsense.

How Did This Happen?

It was inevitable that the IPL effect would eventually seep into ODI cricket. That brand of cricket promotes small boundaries, dead batting tracks and atrocious bowling and fielding (thank you Sri Lanka for playing your part).  This isn't ODI cricket, it is Fifty50 cricket.

It is important to note the distinction:
One could argue that Sri Lanka had the same opportunity on the same pitch to make those kind of runs. But whose home turf is this? Who gets the maximum exposure to these grounds? IPL matches, the Champions League T20, the Ranji Trophy, Irani Cup, Duleep Trophy... this is India's back yard and they know how to use it.

Of course not, in fact I am all for home advantage *providing* it continues to be a fair cricketing contest.  There is nothing fair about it when the bowler is taken out of the equation, it becomes Shane Warne Cricket on Playstation.  Batting pitches this bad (or 'good' batting tracks) is equivalent to cheat codes.

I remember when Ganguly's tour party came down to New Zealand in 2002/03, and the reverse happened with wickets tumbling everywhere and Andre Adams was as lethal as Brett Lee. There was such a storm kicked up that the following tour was tailor made for batting again, and the batsman had a field day with India cleaning up the series.

How is a wicket taking paradise any less biased than 400+ conditions?

Some home advantage makes sense, lunacy does not.

Rohit Sharma has an ODI batting average of 38.  Decent yes, but nowhere near deserving of the two biggest individual scores in the game.

The real telling numbers come in the home-away-neutral averages treble of 68-27-35, plus lots of games in Australia with an average of 26. 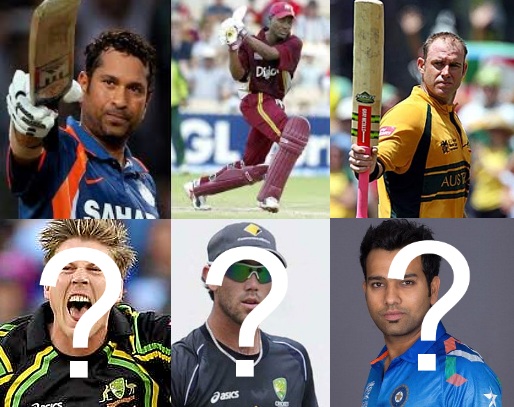 Something is wrong with this picture.


What is the Damage?

The batting records will rumble, the top ODI innings list has become a bit farcical and so too will the top ODI batting totals as well.  Any bowling attack that concedes 400+ in 50 overs should be shot at dawn.

Don't get me wrong, stating that Rohit Sharma has Destroyed Cricket is *not* an attack on Rohit, he has been simply played with the cards dealt to him.  Who wouldn't love to score double hundreds?

The point is that he is currently a symbol of everything that is going wrong with the ODI game, no player should be getting doubles let alone him.  Glenn Maxwell another prime example, a slog merchant swinging as if blindfolded.

Hopefully the game will still live on in sanity with plenty of matches outside of India, and that includes the upcoming World Cup.

If Rohit Sharma hits anything close to a double century during that tournament, I will eat my cricket bat for breakfast.
Posted by The Cricket Musings at 7:11 PM